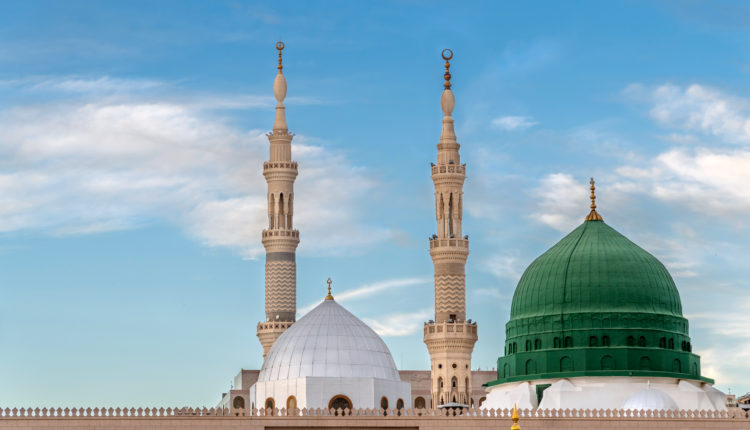 The Muslims were now settled in Medina but there were still many problems to be solved. First of all, they needed a place where the believers could come together to share the verses of the Qur’an, where they could perform the Prayers and listen to the advice and tabligh of the Messenger, peace and blessings be upon him; where the issues of the day would be discussed and resolved; in short a place where they could come to the awareness of being a community, and this meant they needed to build a masjid.

They no longer had the Ka’ba where they could seek refuge in. That is why they were performing the Prayers, when their time came, wherever they happened to be.

First they decided where they needed to build the mosque. It was where the camel of the Messenger of Allah had first sat, and it belonged to two brothers Sahl and Suhayl who were under the protection of As’ad ibn Zurara who was the envoy of the sons of Najjar. There were sheep sheds, old buildings and a few graves in this piece of land.1

Our noble Prophet called the sons of Najjar who were his relatives and requested to buy the land from them for its price. They on the other hand said: “We swear we do not want any payment for this, we believe Allah will give us our compensation.”

They wanted to be one of the pioneers in taking the cause further. But the Messenger did not want to be a burden on them with such an important issue. He called out to Abu Bakr and they bought the land for ten dinars.2

Thus, the problem of land had been solved and now it was time for construction. Everyone was ready to help; some were preparing the mud-bricks, some were carrying stones and some were putting the material together, thereby building piece by piece a new civilization! As’ad ibn Zurara was putting the stones and the mud-bricks that had brought together, acting as the master bricklayer in the Prophet’s Mosque.

They were distinguished in all their actions and were taking pleasure in their arduous work. They would pray: “O Lord! We do not know of a better thing than the abode of the afterlife that is Yours! Help those who uphold your religion as the Ansar and the Muhajirun.”3 Such were their prayers, and they were singing their supplication heartily, giving the whole place an atmosphere of celebration.

The Messenger of Allah was among those who were working in the construction; despite all the objections, he insisted on carrying the mud-bricks and stones, showing that in all matters he was among his community, leading them. He joined in the supplications of the Ansar and the Muhajirun now and then and said: “My Lord! The afterlife is the only place where deeds are rewarded! Show mercy to your Ansar and Muhajirun, and forgive their sins! Our Lord! It is not the porters of Khaybar who carry these; these are the best and purest of men.”4

His efforts spurred the Ansar and the Muhajirun on and they were responding with: “How can we sit when the Great Messenger himself is working? Then this means we need to work harder, show more determination!”5

In the meanwhile, the Messenger of Allah caught sight of Ammar. While everyone carried the mud-bricks one by one, he was carrying two pieces of mud-bricks on his back. He had lost his mother as the first martyr of Islam and had endured unspeakable torture at the hands of the polytheist.

Our noble Prophet approached him and stroked his head and then dusted off the dirt from his clothes. Ammar did not stop for a second as the Messenger of Allah was doing all these. The veils hiding the unknown had been opened and he was now seeing certain scenes concerning the future, and with affectionate looks, the Messenger of Allah started to say the following: “Have pity for Ammar, the son of Sumayya, for he will be martyred by a most furious crowd!”6

Before long, a masjid had been built with mud-brick walls; the ceilings made of date fiber, its columns made of date trees and its floor of earth and sand, and the Prayers were performed there. This masjid had three doors and its corners were a hundred zira.7

Here, the Prayers which hitherto had been two cycles were now performed as four cycles, and it was explained that in times of travel they could again be performed as two; but it was set as four under normal peaceful conditions.8