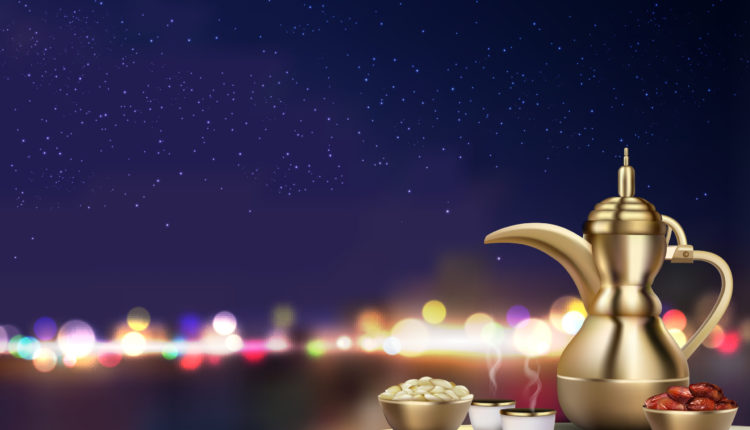 Along with being in every way the most beneficial and virtuous of all the months, Ramadan holds within it some special times. One of these special times is called “suhoor,” and another is “iftar.” Suhoor (before daybreak) prepares one to begin the day’s fast, an important act of worship which Almighty God will reward, while iftar (at sunset) is the joyful time when the fast ends and people receive the provisions that they have used their willpower to avoid all day.

The word “suhoor” comes from the Arabic root word “seher” meaning the final one-third of the nighttime. (In English it can be alternatively spelled as sahoor or suhoor. Note also that the last portion of the night is commonly referred to in modern culture as the early hours of the “morning” or a.m. on the clock, even though it is still dark outside and most people are sleeping.) Suhoor is the name Muslims use for the pre-dawn meal before beginning the daily fast of Ramadan. It is recorded in the sayings of the Prophet Muhammad, peace and blessings be upon him (pbuh), that he called this meal at this specific time of the night “suhoor” in his teachings in the Arabic language.1

The daily fast of Ramadan is prescribed as an obligatory act of worship for Muslims in the Qur’an. The relevant verses were revealed in the lunar month of Shaban (the month preceding the month of Ramadan in the lunar calendar), about 18 months after the Prophet’s exodus from Medina.2 From then on, the Companions of the Prophet (whom Muslims today emulate and look up to) strove to practice this form of worship with great love and enthusiasm, just as they carried out anything and everything taught to them by the Messenger of God.3

When the obligation to fast was first revealed, the practice of the Companions was to abstain from food, drink and marital relations from daybreak until iftar (sunset) and then break the fast. They could then partake of these things until they fell asleep, but once they slept, the next day’s fast began as soon as they woke up.4 They would abstain and fast until the next day’s iftar, no matter what time they had fallen asleep. One day, a Companion named Kays Ibn-I Sirma came home exhausted and requested his wife to prepare some food for iftar. But he had been working so hard all day in the fields that before she came with the food, he fell asleep. Since he slept without eating anything, he began the following day’s fast on an empty stomach and returned to work. Halfway through the day, overcome by hunger and exhaustion, he fainted. Kays told the Prophet about this. Then God revealed the following verse to the Prophet instituting the practice of a “suhoor” pre-dawn meal as a mercy to the Muslims:

It has been made permissible for you to be intimate with your wives during the nights preceding the fast. Your spouses are a garment for you as you are for them. Allah knows that you were deceiving yourselves. So He has accepted your repentance and pardoned you. So now you may be intimate with them and seek what Allah has prescribed for you. [You may] eat and drink until you see the light of dawn breaking the darkness of night, then complete the fast until nightfall. Do not be intimate with your spouses while you are meditating in the mosques. These are the limits set by Allah, so do not exceed them. This is how Allah makes His revelations clear to people, so they may become mindful of Him.5

The Prophet Muhammad (pbuh) rose before dawn to eat suhoor meals himself, and encouraged his community to benefit from the ease suhoor provides for supporting the day’s fast.6 He used to delay the meal until the latest part of the nighttime, close to dawn, and recommended his community to do the same. 7He emphasized the spiritual and physical benefits of the meal, saying:

“Eat suhoor; surely there is much blessing in suhoor.”

“Suhoor is a blessing from God. Do not neglect it.”

“Do not neglect rising for suhoor; it is surely a blessed provision for you.”

The Prophet Muhammad also taught that the practice of suhoor is a distinguishing characteristic of the Islamic fast: “The suhoor is the difference between the fast of the Muslims and that of the People of the Book “[referring to other monotheists such as Jews and Christians].8 He placed great importance on consuming something at suhoor time, even something small: “Have something at suhoor time and at iftar time, even if it is only a swallow of water.”9 He also stated that a date would suffice as suhoor: “How good it is for a believer’s suhoor to consist of a date.”10 He taught believers that suhoor draws the mercy of God and the prayers of angels: “Doubtless God and His angels send salutations on those who eat suhoor.”11 He stressed that the suhoor meal brings ease to the day’s fast, stating, “A nighttime suhoor supports the day’s fast, and a daytime nap supports the night prayers.”12

The Prophet (pbuh), who was even more generous in Ramadan than in the other months, would often share his table with the Companions and host them for iftar and suhoor.13 Always mentioning the blessings of the suhoor, the Prophet would invite his family and the believers to eat the meal together.14 Once when inviting a Companion named Irbad Ibn-i Sariye, he said, “Come to the blessed meal!” again making it clear how beneficial the meal is.15 In another tradition (hadith) showing how the Prophet invited the Companions to suhoor, Zayd Ibn-i Sabit said: “We ate suhoor with the Messenger of God, then we stood for morning prayer.” He was asked “How much time passed between the suhoor and the morning prayer?” He answered, “The time it takes to recite fifty verses of the Quran.”16

Prayer and Supplication at Suhoor

As alluded to above, “suhoor” comes from the word “seher” signifying the final one-third of the nighttime before daylight (also referred to as the early a.m. hours on the modern clock.) In the Quran, God commends those who use the seher portion of the night to pray, recite the Quran, supplicate, seek forgiveness and engage in remembrance of God:

Those who pray, ‘Our Lord! We have believed, so forgive our sins and protect us from the torment of the Fire.’ Those who are patient, sincere, obedient, and charitable, and who pray for forgiveness before dawn.17

Indeed, the righteous will be among Gardens and springs, ‘joyfully’ receiving what their Lord will grant them. Before this ˹reward˺ they were truly good-doers in the world: they used to sleep only little in the night; And in the hours before dawn, they (were found) praying for Forgiveness; And in their wealth there was a rightful share fulfilled for the beggar and the poor.18

The Prophet (pbuh) would always rise nightly to pray, worship, , supplicate and engage in remembrance of God during the seher hours.19 During any part of the year these quiet and peaceful hours are sacred and conducive to worship. During the most blessed month of Ramadan, then, these acts of nighttime worship are even more precious and beneficial.

The Blessing Found in Suhoor

The suhoor is a source of great blessing and satisfaction. All the individuals in a family should participate to absorb the spiritual atmosphere at suhoor and iftar, whether or not they are able to fast, even small children. In the same manner, sharing our suhoor and iftar meals with others amplifies the mercy and bounty flowing from it.

Imsak is the name for the first light of dawn, which ends the blessed window for the nighttime meal. Linguistically, “imsak” means “to pull away one’s hand, to hold back;” in this context it refers to the fasting person’s initiating a fast to refrain from eating, drinking and sexual relations from the moment when the day begins.

When imsak arrives, the believers begin this very special form of worship, the fast that God will reward. As God states, “Fasting is for me, and I will reward it.”20 As Ramadan progresses day by day, the joy and satisfaction brought by fasting increases along with the hunger and thirst. But for a fasting Muslim, “whose breath is more pleasing to God than musk,” it is a noble challenge to exercise the patience so valued and honored by the Messenger of God.21 And the iftar time brings to an end this act of worship that, only for the sake of obtaining God’s pleasure, a believer undertakes all its challenges.