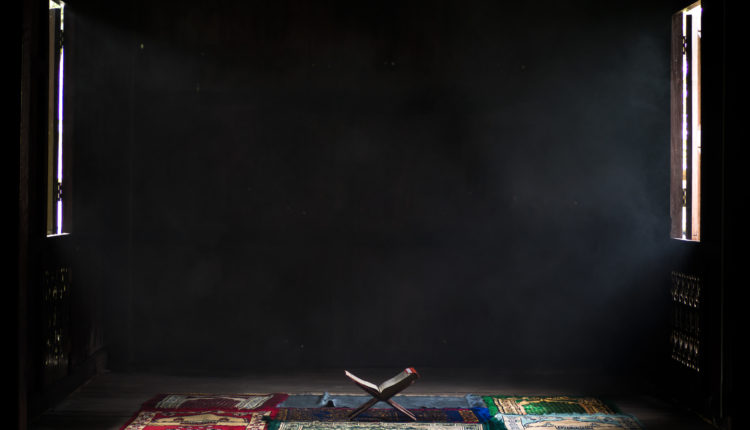 Those who have bright nights, would their days not be bright also?

Days, nights, hours and minutes come and go swiftly in holy times, especially for people who return to their inner world. Those who devote themselves during nights of this holy time feel awakened and fulfilled in the highest garden in paradise (firdaws) made possible by the light gushing from out of the darkness.

In Ramadan, the nights sweetly wrap the feelings and thoughts of a person with their secret embrace. Ramadan penetrates our hearts with its night, day, fasting, and special prayers. There is no other month whose days and nights are open to luminousness as much as Ramadan. Moreover, the Qur’an, a guide to humanity, was first revealed on the Night of Qadr, a night more powerful a thousand months.

The Night Of Qadr

On the Night of Qadr, the single most important event in human history unfolded. The Glorious Qur’an was preserved in ‘the Preserved Tablet’, and the Archangel Gabriel descended with the blessed book to reveal it upon the command of God to His Messenger (pbuh). On this night, the doors of the heavens opened and the revelation descended. So valuable is this Night of Qadr that a special sura has been devoted to it in the Qur’an; it is a night that is better than a thousand months. Gabriel descended many times to earth in order to convey a message to the prophets, but on the Night of Qadr Gabriel, the other angels and God’s mercy poured down to earth for the sake of the Qur’an.

There is a particular chapter in the Quran that explains the night of Qadr and its importance. The surah talks about the beginning of the revelation of the Qur’an and the landing of the angels and the soul as well as the divine well-being that covered the universe that night:

The night of Qadr means “judgement night “, the night of the emergence of eternal law based upon the judgments of Allah. It is understood that some kind of fate is determined in this night. In other words, copied from Imam Al-Mubin(Clear record) to Kitab Al-Mubin(Clear book).

In Ad-Dukhan , Allah informs: “I swear to this book, which is clear and clarifies the truth; We have sent it down on a blessed night. Because we warn those who turn away from the truth. It is such a night that every wise affair is written and determined by a command from Our providence. As a mercy from his Lord, we always send Messenger. Verily Allah is all hearing and all knowing.”1.According to the most of the Mufassers (interpreter of Qur’an), that blessed night is Laylat al-Qadr.

Our Prophet (peace be upon him) said that fasting  in the morning of the Qadr Night will be equal to the fasting of the whole year.2 He also stressed the night’s importance saying,

Why is The Night Of Qadr Named so?

The Night of Qadr is an accepted form of a prayer our Prophet made because of the love of his nation. Whereupon he prayed, “May my nation have performed the deeds that other nations could not do in their long lifetime.” 3.

Bediuzzaman says that rewards given for deeds during Ramadan are expressed in thousands:

When is Laylat al-Qadr?

Allah (celle celaluhu) did not explicitly declare which night of the Ramadan is the night of Qadr. It is evident that Allah Almighty has hidden extremely important things in the world to increase their value or to test humanity. Allah (cc) concealed man’s death in his life, his admired servants among people, and his greatest name in the most beautiful names of himself. Likewise, Salat-i vusta in five prayers, Allah`s sake in all kinds of worship, doomsday in time, death in time and the night of Qadr are all concealed. 4. These carry value so long as they remain hidden. 5 6.

The hadiths declared that the night of Qadr is the 27th night of Ramadan and it was accepted by the majority scholars thus, the whole Islamic world adopted it. The interpretation of His Holiness Bediuzzaman is as follows: “The 27th night is very likely to be Night of Qadr…Even if it may not be certain, the ummah looks at that night with that view. Hopefully, it will be accepted as a true judgment.” 9

The Night of Qadr Being Hidden

Gulen gives us the following explanation about night of Qadr being hidden: “There is a different secret in keeping this night confidential. Our master (sallallahu alayhi wa sallam) knew it first, but then he was made to have it forgotten.10 So that it is searched for and valued. Possibly that those who only revive just this night may benefit from mercy, but there is no doubt that those who know and revive Qadr night every night will be granted more and should not be ungenerous against hidden treasures. It should not be that we wait a whole year and only revive the twenty-seventh night of Ramadan-i-Sharif, and thus, expect that we will be given the opportunity to be rewarded to the people who valued every night as the night of Qadr by virtue.

“Know every night as Qadr, every person as Khidr!” Is a short but very promising proverb. (Khidr: He is a righteous servant of Allah mentioned in the Qur’an without his name or other identical details). Yes, Khidr (aleyhisselâm) is also hidden among people. However, if you respect everyone, help every need, hold one’s hand, open your heart to all people, you will come across Khidr one day from the people of faith and your heart will also grow. Such is how we should aproach the Night of Qadr.