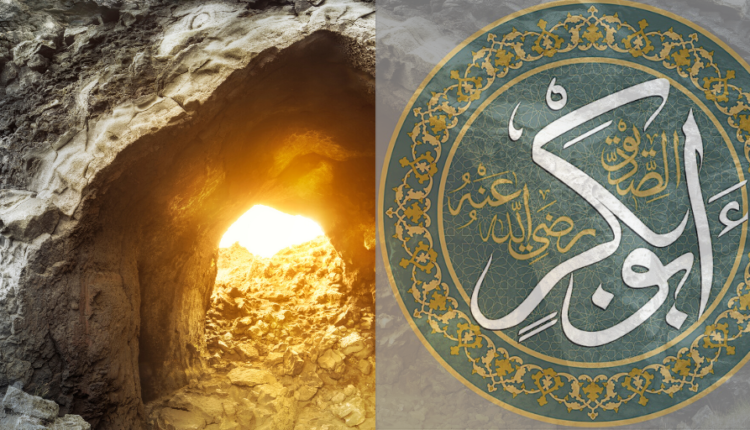 Abu Bakr wanted to be the first to enter the cave. He wanted to extinguish whatever evil it may harbor and thus protect his Beloved, peace and blessings be upon him, from any harm. This was sensitivity peculiar to Abu Bakr. All his efforts stemmed from his care for the Pride of Humankind that he shouldn’t be harmed in any way. That is why he tore off his clothes, and was covering the holes in the cave to prevent wild animals from entering. However, there were two holes left that he could not cover, but he had a solution for these as well: He put each of his feet in the two separate holes and thus invited the noble Prophet in. Years later Umar would speak of these efforts and say “I would have given all I had, and done anything to have Abu Bakr’s night at the cave with the Messenger.”

Inside the cave, the Messenger of Allah placed his glorious head on the blessed knees of Abu Bakr and started to rest his eyes. Abu Bakr sat there, completely still, with both of his feet covering the two holes of the cave. After some time had passed, Abu Bakr felt a sting on one of his foot. It was the bite of a snake. Despite cringing with pain on the inside, Abu Bakr did not move or make a sound in order to not disturb his beloved Messenger. What great love! What great devotion!

Eventually, the tears that came down from his eyes and the cold sweat pouring from his forehead alerted our noble Prophet and he asked: “What is with you, O Abu Bakr?”

“May my mother and father be sacrificed for you, O Messenger of Allah, a snake has bit me,” was all Abu Bakr could say. He was rather embarrassed to be saying this at all, for he did not want to discomfort the Messenger of Allah with such things. He didn’t want to waste his precious time with such an issue he thought was insignificant! Upon that the Messenger of Allah placed a little bit of his saliva gently on the wound and then asked his Lord to heal his faithful Companion. All of a sudden, with the will of Allah, things returned to normal as if the incident had not taken place at all. There was no pain left in Abu Bakr.1

In the meanwhile, a spider had set to work and was weaving its web at the entrance of the cave. Two pigeons had come to nest at the entrance as well. A tree also started to blossom and was acting as a curtain for our noble Prophet. It was clear that Allah the Almighty was not going to leave his Beloved to anyone else’s devices, and was going to protect him Himself. The track followers had climbed Thawr, and they were scanning the cave. When they saw the pigeons, the blossoming tree and the spider web, one of them naturally said: “Look at this spider web! It looks as if it was weaved even before Muhammad was born.”

The others were thinking no differently. Even though the spider’s web provided only a very thin curtain between them and the Messenger of Allah it had protected him and now the Quraysh were returning empty handed.2

Inside the cave, Abu Bakr had seen that the polytheists had closed in on them at a spear’s length; he could hear them speak and was breaking out in a cold sweat. He could see the feet of these men and almost hear them breathe and gasp like enraged cows, and he whispered: “O Messenger of Allah! If one of them should kneel and look inside from the viewpoint of his feet, he will see us easily!” It was once again up to the Messenger of Allah to calm his friend down in the cave, a faithful friend whom he had called “my brother.”

“Why do you fear about the outcome of two people whose third is Allah, O Abu Bakr?”3

It was the Messenger of Allah who was saying this. He was the most beloved servant of Allah, and Allah the Almighty had promised him protection from the evils of men.4 He was speaking sure of himself for he knew that even if the Quraysh did not understand, Allah the Almighty would help His Last Messenger like He had helped all his Messengers; He would support him, give him peace of heart and help him with armies that eyes could not see.

Abu Bakr knew this as well, but knowledge was not enough to dispel the anxieties that one felt when one actually had to live through this process. All his worry was that something would happen to the Messenger of Allah, for he knew that any harm that fell upon his own head would be limited to one person only, but if something should happen to the Pride of Humankind, peace and blessings be upon him, this would affect the whole of humanity.5

At last, the people who had come to the entrance of the cave returned and now the road promised a degree of safety. They waited there for three days. During this time, Abu Bakr, may Allah be pleased with him, stepped out to keep vigil. When all was peace and quiet, his son Abdullah would come to them and bring them news of what was happening. Later came Amir and their guide Abdullah ibn Urayqit; bringing with them the camels that were to take Allah’s Messenger and Abu Bakr to Medina.

Abu Bakr, may Allah be pleased with him, got hold of the camels and offered the one that was most beautiful and well looked after to our noble Prophet, peace and blessings be upon him: “May my mother and father be sacrificed for you! Get on it, O Messenger of Allah.”

But he received a response he wasn’t expecting: “I cannot get on a camel that does not belong to me.”

Abu Bakr would now act in accordance with his name siddiq and say: “May my mother and father be sacrificed for you! He belongs to you, O Messenger of Allah.”

But this wasn’t a solution either. The Messenger of Allah was persistent: “No, only after I have paid the price you have bought it for.”

Abu Bakr was forced to tell him the price. Upon that, the Illustrious Beloved of Allah, peace and blessings be upon him, said: “I buy it from you for the same price,” and thus at an important turning point such as the hijra, another resounding message was offered to the Ummah.

The news that came from Mecca revealed that the attempts to look for the Messenger of Allah was somewhat abated. This meant that it was time to set off. It was to be with the first light of the month of Rabiulawwal, another Monday morning. They would leave the cave very early and first would go towards west on the side of the coast, and then through the direction of the Red Sea they would turn towards Medina, their ultimate destination. This was an unusual route between Mecca and Medina. This difficult route would start from Thawr and pass through Ufsan, Amaj, Qudayd, Harrar, Sanayya, Marjah, Ziludaywayn, Zikashar, Jadajid, Ajrad, Abayid, Faja, Arj, Air, Rism and Quba411 and would take a whole week.6