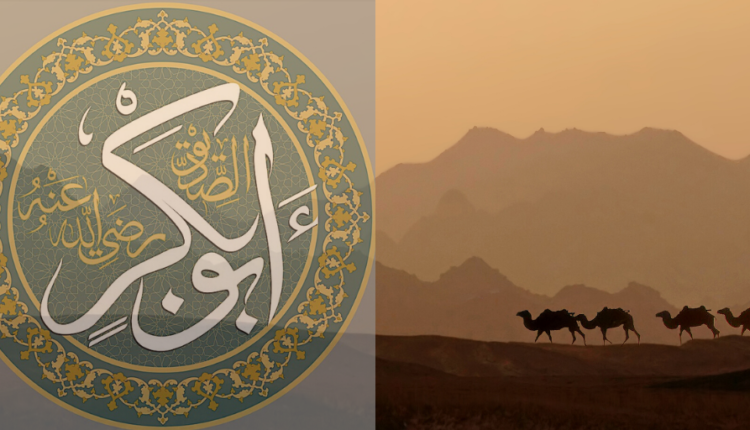 Our noble Prophet asked Gabriel, after he had brought him the good news of the hijra:

“Who will be my Companion on the hijra?”

Abu Bakr had been eagerly waiting to be the Prophet’s Companion on this journey. Then, unexpectedly at noon time, when everyone else was relaxing in their homes, the Messenger of Allah came and knocked on Abu Bakr’s door; he was asking leave to enter. This was strange indeed! The most beloved servant of Allah, peace and blessings be upon him, was at Abu Bakr’s door, waiting to enter.

“May my mother and father be sacrificed for you! There must be something really important since he comes at such an hour,” Abu Bakr mumbled to himself.

The reply was not late in coming: “I have been given the permission to leave Mecca and go on the hijra.”

Abu Bakr was now even more excited and asked: “Are we to go together, O Messenger of Allah?”

The following words flowed from the Messenger’s lips towards the face that was waiting eagerly: “Yes, together.”

Abu Bakr was overjoyed! He had prepared for that day and was waiting for the order to go. When he had asked for permission to migrate with the other Companions, he had received the reply: “Do not make haste! One hopes that Allah will give you a Companion!”

Afterwards, they started the preparations for two. For four months he had been preparing two camels for this long trip. He had been expecting these very words from his Beloved. This was the start of the next phase that would change the course of events. Being the Companion to the Messenger of Allah on this historic journey! Could there be a greater fortune than this? Abu Bakr, may Allah be pleased with him, had been unable to control himself and was crying out of joy.2

But the Beloved of Allah, peace and blessings be upon him, had to be an example in all respects and so said to Abu Bakr: “Only under one condition: I will pay the price of the camels.” Thus making it clear that on such an important journey as this, one could not make use of something, the price of which one had not paid.

The Precautions concerning the Hijra

Since everything had already been communicated, it was time to set on the journey; Abu Bakr would prove that he was siddiq and would take precautions to make the road safer as befitting to his name. One had to be on guard at all times. Going on such a long journey with camels was not going to be easy.

So, they first made an agreement with a polytheist by the name of Abdullah ibn Urayqit who knew the road well. The Messenger of Allah knew very well that Abdullah was a man who did not care much about the gains of this world and was a man of his word; so, he would not be tempted by the money to give Quraysh information about their migration. They were to meet at Thawr three days later and Abdullah was going to bring the two camels that Abu Bakr had bought for the hijra, and thus the journey would start.

Abu Bakr had told his daughter Asma to prepare their food and to send it to Thawr while they would be staying there. Asma was preparing the food with great care, and sent it after she put it in a small bag and sealed it carefully. She had not been able to find a rope with which to tie the bag and so with the directive of her mother, she had removed her own belt from her waist, and ripping it into two, she tied the bags with these strings, and for this reason she was later called “Dhi’n-nitakayn” meaning the “owner of two belts.”3 Abu Bakr’s son Abdullah would come to them together with Amir and bring them the food that Asma prepared along with the news of the Meccans during the period they stayed there.

There was another precaution that Abu Bakr took; he called his shepherd Amir to his side and asked him to herd the sheep after them so that their tracks would be covered by the tracks of the sheep.4 He knew very well that the Meccans were very good at following tracks and so they could easily use this to their advantage.

The Night of the Migration

It was the 27th day of the month of Safar. The blessed immigration had started from the house of Abu Bakr in the dead of night. The direction, however, was not the direction of Medina as the other Companions had taken, but Thawr, in the direction of Yemen. They went for about eight kilometers and they were going to climb Thawr which was high, full of great rocks and rugged roads. While doing this, the Messenger of Allah was trying to tiptoe so that the people following him would not have traces to pursue them with. He had to maneuver with precaution; he was going to stay there for a while and watch what was happening in Mecca from there, for the Messenger of Allah knew that they did not want to give him breathing space even outside Mecca; he knew that they would try to stop him reaching his goal the minute they realized that he had left his village. The Quraysh knew that the Companions of Muhammad had gone to Medina and they had been pursuing those who directed themselves towards that city. Abu Bakr’s sensitivity and effort was not lacking; he was taking great care of the Messenger of Allah fearing something might befall him, sometimes keeping his back and sometimes walking in front.

Our noble Prophet noticed his anxiety and asked: “O Abu Bakr! Why do you sometimes walk in front of me and sometimes behind?”

“O Messenger of Allah; I walk behind you to make sure that there is no danger behind you, and I walk I front of you to avoid possible armed guards placed on your way.”

“O Abu Bakr, do you think there’s anything dearer to you than me?”

An answer that was befitting of the Loyal and Faithful One was not late in coming: “No, O Messenger of Allah! I swear by He who has sent you with truth that rather than a hair on you being injured, I would give my life, and take all the troubles that may befall you on my own head!”5