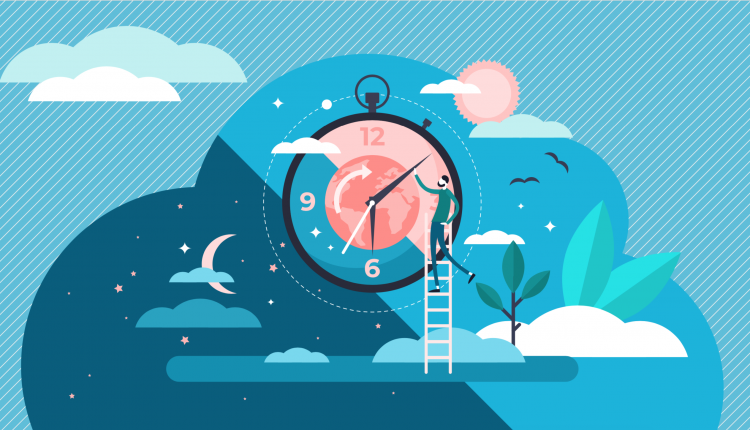 Sleep is a blessing from God. Humans spend around one third of their lives sleeping. Sleep is essential for the performance of important daily acts such as speech, memory, and original or flexible thinking. At the end of a busy day our body looks forward to relaxing and restoring its energy for the next day. Although sleep plays a significant role in our daily life, most of us rarely find and use suitable periods for a good sleep. There is no fixed amount of time that everyone needs to sleep, since this varies from person to person depending on several different factors, such as genetic background, age, and daily activities. For an adult individual the average time spent sleeping can vary from six to eight hours.[1] We need to make some time for rest and recovery.

In reality, people who habitually go to sleep very late at night have difficulty waking up in the morning. This happens because of disturbances in the body’s internal clock or circadian rhythms. Circadian rhythms are important in determining the sleeping and feeding patterns of all creatures.

There are clear patterns of brainwave activity, hormone production, adjustments to body temperature, blood pressure and many other biological activities linked to this daily cycle.

It is known that melatonin, a hormone with a high level of concentration at night and low levels during daytime, regulates the circadian rhythm.[2] However, there are other factors that activate or inhibit the internal body clock and several studies have demonstrated that light on the eye’s retina is a more powerful influence on human circadian rhythms.

As light that is radiated from the sun travels through the atmosphere, some shorter wavelengths of light, such as violet and blue, are absorbed by gas molecules and then scattered all around the sky. This gives the sky a blue appearance. According to Dr. Mark Rea, director of the Lighting Research Center, our daily rhythms are in fact blue sky detectors, and he notes, “Blue sky is ideal for stimulating the circadian system because it’s the right color and intensity, and it’s ‘on’ at the correct time for the right duration, the entire day.”[3]

Researchers have used light for jet-setters, sleep-troubled patients, and shift workers to set their body clocks and solve sleep problems. Moreover, they claim the dogma that the 24-hour biological clock is set by light alone is a misconception that many scientists have believed for years.[4] Steven Lockley of Brigham and Women’s Hospital, a Harvard research and teaching affiliate says, “The visual system in humans is most sensitive to green light, but when we exposed twelve healthy young men and women to the same amount of either green or blue light, their 24-hour rhythms shifted twice as much with blue than with green.”[5] After exposure to blue light, their body clocks were rearranged by three hours, whereas the effect of green light was a change of about 1.5 hours. So, if your eyelids get heavy around 11 p.m., 6.5 hours of exposure to blue light will keep you up until 2 a.m. Since television and computer screens produce blue light, watching them too much at night may inappropriately affect the sleep cycle.[6] However, if a change in shift makes you sleepless at 4 a.m., proper blue light therapy might help you sleep three hours longer.

To reduce the impact of synthetic light on our biological system, lighting manufacturers have been developing dynamic lighting control led by computer based systems. For example, to perk people up in the morning, the lamp increases the blue light concentration. After lunch, it again produces more blue light to counter afternoon sleepiness. In Europe, such systems have already been installed in some places including some hospitals, business offices, town halls and traffic-control centers.

Keeping all this in mind, we see how blue light affects our daily life. So, sleeping in some parts of the daytime can have advantages and disadvantages for sustaining optimal performance.

If we turn our attention to the life of the Prophet Muhammad, (peace and blessings be upon him) we see how he successfully set an example for his Companions. It was the practice of the Prophet and his Companions not to sleep after the dawn prayer, the first of the five daily prayers, as it is a time of blessing. He would read some parts from the Qur’an and reflect on the universe and its Creator at a time when concentration is at its peak and the mind is clear of daily worries. Once dawn broke, the Prophet would pray and then speak with people who stayed behind for some time. Therefore, some of the early Muslims disliked the idea of sleeping immediately after dawn because being awake at this time was encouraged. In his Risale-i Nur collection, Bediuzzaman Said Nursi explains the three types of daytime sleep as follows:

The first is “ghaylula.” This is from pre-dawn to forty minutes or so after the sun has risen, the time when prayer is lawful but reprehensible. Sleep at this time is contrary to the practices of the Prophet, since according to hadiths, it leads to a decrease in one’s livelihood and to its being unfruitful. The time most appropriate for preparing to labor for one’s sustenance is when it is cool. When this time has passed, lethargy descends. It has been established through numerous experiences that just as this is detrimental to that day’s labor and indirectly to one’s livelihood, so also is it the cause of unfruitfulness.[7]

Based on our limited knowledge about blue light, by sleeping at this time we may cause our biological rhythms to delay because of missing the right blue intensity at the correct time, which can result in a shift in sleep period and other shifts in daily cycles.

The second is “faylula.” This is from the afternoon prayer till sunset. This sleep leads to a diminution of life, that is, it makes life that day shorter and makes it pass in a state of semi-sleep due to drowsiness, thus causing a physical deficiency to life. So too in an immaterial aspect, since most of the results of that day, material and immaterial, become apparent after the afternoon prayer, to pass that time in sleep as though prevents those results being seen and makes the day as though not lived.

The third is “qaylula,” which is in accordance with the Sunna of the Prophet. It is from mid-morning to just past noon. This sleep is part of the Sunna since it allows a person to rise at night to pray. So also in the Arabian Peninsula to rest from work at noon when it is intensely hot is the custom of the people and of the area, so has further strengthened this Practice of the Prophet. This sleep increases both life and sustenance. For half an hour’s qaylula sleep is the equivalent of two hours’ sleep at night. That means it adds one and a half hours to a person’s life every day. It saves one and a half hours from the hand of sleep, the brother of death, and makes it live, adding it to the time of working for one’s livelihood.[8]

Recently, this type of sleep or nap has been strongly advised for health and for enhancing daily performance. “When I was at NASA we gave the pilots a planned nap in the cockpit,” says Rosekind, a board member of the National Sleep Foundation. “While two pilots flew the plane, the third would have forty minutes to nap. We found they would sleep for twenty-six minutes, which boosted their performance by 34% and their alertness by 54%.”[9] He explains that the pilots were able to improve their performance significantly, and he adds that the effects of a short nap of less than a half hour lasted for two to three hours. Similar research shows that in this way you can make yourself more alert, reduce stress, and improve cognitive functioning, which means more patience, less stress, better reaction time, increased learning, and more efficiency.

Each day our daily life gets faster and we unintentionally ignore our body and its need for rest, which leads to sleep deprived eyes, disturbed sleep cycles, stress, and so on. Sleeping well keeps us alive longer. But this does not mean sleeping for a long time, which increases the risk of death. What we learn from the Prophetic tradition and research into the effects of light on our biological clocks can help us to find and to arrange proper times for sleeping and coordinating our daily activities. Once we achieve this, benefits in spiritual life, health, social interactions, learning and thinking clearly will follow.