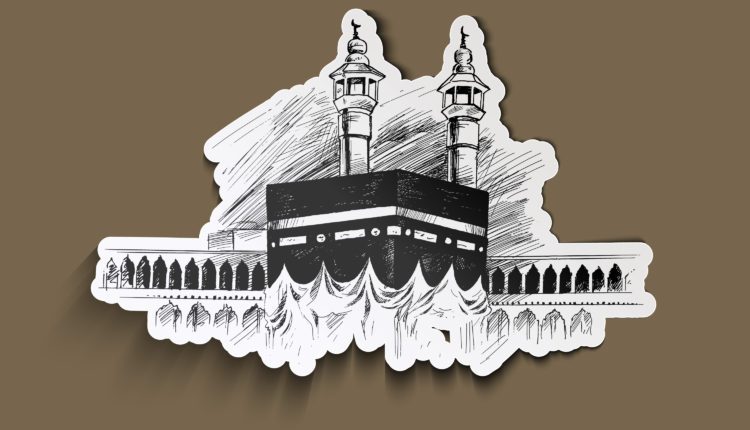 According to Islamic history, God commands Prophet Abraham to go to Mecca and bring his baby son Ishmael and his wife Hajar there. Abraham does his duty and leaves his baby and his wife in the desert. Then he goes away. Hajar, knowing that Abraham followed a command of God, trusted in God and His protection.

After staying in the desert for a while, Hajar ran out of water and began to look for water to give to her baby Ishmael. She started to run anxiously between the two hills of Safa and Marwa. Suddenly she heard a voice calling her son’s name. An angel was standing next to her baby. When she looked carefully, she saw that there was a spring at her baby’s feet and it was bubbling in the middle of the desert. She couldn’t believe what she was seeing.

Hajar heard the angel’s voice again. The angel said to her: “Do not be afraid of being lost! Here is the House of Allah. It will be built by this boy and his father. Allah will never let this family perish!” Then the angel disappeared. When Hajar saw the water flowing, she shouted: “Zam! Zam!” meaning ‘stop’ in Arabic. She actually wanted the spring water to stop flowing. That is why this water is called Zamzam today. Hajar and her son Ishmael remained in that same place. After a long while, the Jurhum tribe came and settled there; then they started to build the city of Mecca in that location.

Eventually that desert land became fertile with the Zamzam water and this fertility attracted more and more people. Ishmael grew up and became a young man. He married a girl from the Jurhum tribe in Mecca. One day, Prophet Abraham came to visit Hajar and Ishmael. This time his duty was to build a sacred house as a place of worship, as this was ordered by God.

He took his son Ishmael and they both built the Ka’ba. After completing the construction, Prophet Abraham opened his hands, and prayed:

“Dear Lord! Please accept this from us; show us the ways of worship and prayer. Dear God, raise up a messenger among this community who will teach your commandments to them.”

His prayers were indeed accepted by Allah; Allah sent Prophet Muhammad, peace be upon him, to Mecca from Abraham’s own lineage years later. Also, Prophet Muhammad once said to his companions: “I am the answer of the prayer of my forefather Abraham.”

Going back to the story, when Ishmael settled in Mecca, he had twelve sons and many grandsons. Each of them spread all over the Arabian Peninsula and each son established a different tribe. Prophet Muhammad, ﷺ, was from the tribe of Quraysh in this lineage and from the sons of Hashim, which was a branch of the Quraysh.

The grandfather of Prophet Muhammad was named Abdul Muttalib. His real name was Shayba and he was one of the sons of Hashim. Hashim, Abdul Muttalib’s father, was one of the most distinguished and virtuous men of Arabia. He was known for showing great hospitality to the pilgrims of the Ka’ba. After Hashim died, Abdul Muttalib became the leader in Mecca. One day, Abdul Muttalib had a dream in which a person said: “Dig up Zamzam!” He asked: “What is zamzam?” The voice answered: “Zamzam is a water spring that will never dry up. You will meet the water needs of the pilgrims with Zamzam.”

Abdul Muttalib had heard about the Zamzam before. He knew that the Jurhum tribe had thrown all their precious belongings in this well; they had covered its opening and they had all fled. However, there was no one who could remember its place. In his dream he was given the exact location of it and he took his son with him and went to the place. They started to dig for Zamzam. Later on, they found a big rock which covered the mouth of the well. When they lifted the rock they saw precious stones and jewels in it. They began to take these items from the well. When it was empty of these items, they saw the zamzam water in the bottom of the well. After seeing this blessing, Abdul Muttalib prayed and thanked God.

When Abdul Muttalib found the zamzam well, he only had 1 son. He asked Allah to give him 10 sons. Within the next 30 years, Allah granted him 10 sons. He got Abdullah, who would become the father of Prophet Muhammad, ﷺ, later on. Abdullah was among his younger sons. When Abdullah grew up, many of the young girls in Mecca wanted to marry him; because he was a righteous man and he was also a very good-looking man.

When it was time for marriage, Abdul Muttalib took his son and went to the tribe of Zuhra. They knew that there was an honorable girl who had virtue and good family lineage in this tribe. Her name was Amina. They asked for the hand of Amina; and the other side accepted the proposal. Then, Amina and Abdullah got married. Abdullah was a tradesman. Soon after his marriage, he went away on a trade caravan. When he was close to Madina he fell ill and he had to stay there. Shortly after, he passed away there at the age of 25. His wife Amina suffered a lot because she had lost her husband at a very young age. At the same time, Amina was pregnant with their first child Muhammad ﷺ.