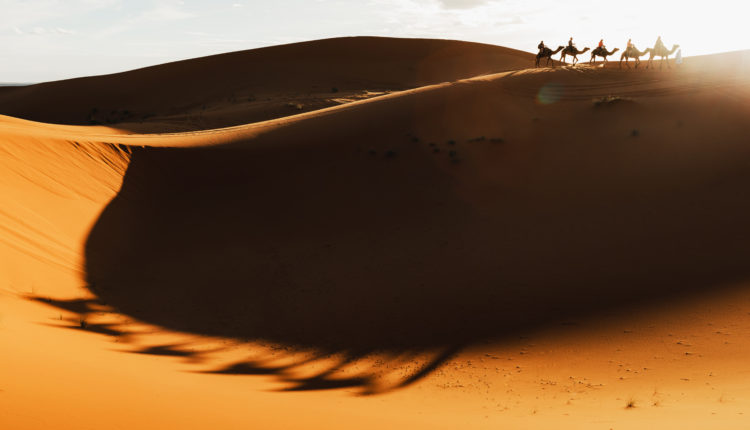 Five years had passed since the coming of the first revelation. It was the month of Rajab. The house of Ibn Arqam as a temporary sanctuary had met their needs to a certain degree, for there was now a place where believers could speak about issues concerning their faith in a peaceful environment. But this environment was limited to the one house only; people who left the house were being followed and especially those who were weak and had no protection were being subjected to increasing violence. With each passing day the Meccans were becoming even more merciless and they were giving no space to the Muslims to live according to their belief. Hence, there was need for a more fundamental solution. In the meanwhile, Allah the Almighty had shown a way to the believers through the Truthful Gabriel:

O My servants who believe: Keep from disobedience to your Lord in reverence for Him and piety. For those devoted to doing good in this world, aware that Allah is seeing them, there is good (by way of recompense), and Allah’s earth is vast (enabling worship). Those who are patient (persevering in adversity, worshipping Allah, and refraining from sins) will surely be given their reward without measure.1

The verse was not giving a clear order of migration to everyone, but spoke of the ease and comfort such a journey may afford for living a religious life. Since the world was a vast place; then one had to take advantage of such vastness. Accordingly, the Messenger of Allah would offer the following suggestion: “I wish you could go to Abyssinia, for that is a safe place; and there is a king there under whom no one is oppressed!”

Abyssinia was a known place for Mecca as there was quite a lot of traffic between the two places due to trade. There was a general knowledge about Abyssinia in Mecca due to these visits. That is why the believers were encouraged to go to this land, the land of Najashi.

A mere gesture of our noble Prophet would set masses into motion. He was now saying that it was safer to go and live in Abyssinia, and he was encouraging the believers to go in that direction. That is why preparations were now underway and fifteen people, including four women, set for the road in order to escape being the target of violence in Mecca and to be able to live their religion more freely.2Among them was the son in law of the Messenger of Allah, Uthman.

Naturally, this journey would be made without the knowledge of the Quraysh. In the darkness of the night they set out away from Mecca towards a new world. This was the first migration. It was not clear what would happen but such concerns were hardly important. When it was Him Who led, what could they possibly worry about! They came to the shores of the peninsula, some on animals, and some on foot. It was Divine will that had decreed that they should go on this journey. They met two ships that were waiting at the shore, and with the price of half a dinar, they bought their passage into Abyssinia.

On the other hand in Mecca, the absence of leading believers who left for Abyssinia, such as Uthman and his wife Ruqayyah, Mus’ab ibn Umayr, Abdurrahman ibn Awf, Abu Salama and his wife Umm Salama and Uthman ibn Maz’un, was greatly being felt. 3 The Quraysh sent men after them to seek and find them. But they were too late, for when they reached the shore, the ships had already set off and the believers had already set sail for a peaceful land.

At last they reached Abyssinia, a place where neither the judgments of Abu Jahl and Abu Lahab, nor the insults of Utba and Shayba, nor the harassment of Uqba and Umayya could follow them! At once all the obstructions that they had faced to live their belief when they were in Mecca had disappeared; they could now pray in peace and read the Qur’an in rapture.4

The Messenger of Allah had for a long time not been able to receive any news of those who had gone to Abyssinia, and he was wondering what had become of them. At last a woman who came from those parts said that he had seen Uthman and Ruqayyah. The news brought joy to the Illustrious Beloved of Allah, peace and blessings be upon him, and he said: “Verily Uthman and his wife are the third household to have migrated after the household of Ibrahim and Lot. 5